Initiations are moments of great life changes. Nothing seems quite the same after an initiation. The energies have changed quite suddenly. Sometimes it feels like entering into a dream.

Giving birth is just such an experience. The whole body surrenders to a process we are not in control of. On the one hand we are powerless – surrendering to a power that is greater than us. On the other hand we are that power – it is our body, our being, that feels the power of creation, the power of giving birth. We become that power.

Another such life-altering initiation is being sexually abused and raped. Here too, nothing seems quite the same afterwards. 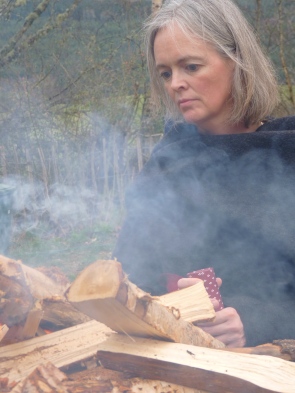 I see energies – and this is what I see: Sexually abused women have been confronted with an utterly devastating powerlessness and a deep vulnerability. The unspeakable pain reaches right to the core of who we are. From such devastation and wreckage, from the core of vulnerability, a power can rise

A next step is often the realisation that I am whole, I am innocent, and I am pure. No one has the power to take my wholeness, innocence and purity away from me.

Maori women have a cry that rises from the womb up and out through the vocal chords. It resounds through the valley and is felt in the bones of every living being in the surroundings. In the Celtic tradition as well as other traditions women express their pain by waling and lamenting in song and in groups.

From there on the healing can continue through forgiveness: forgiving myself, forgiving God, forgiving all the people who didn’t help me, and forgiving the perpetrator.

There are so many different aspects and layers to sexual abuse that it gives us the opportunity for tremendous growth.

Many women come to me as they work through their experience of sexual abuse. One woman shared her efforts with conventional therapies. She experienced them as unsatisfactory, superficial and sometimes even hurtful. Often the therapists were not able to empathise and she felt like a car needing to be repaired. Their statements ranged from ‘you must have enjoyed it, otherwise you would have defended yourself’, to ‘it is impossible to survive such an experience without longterm damage’. This was all neither encouraging nor helpful to her and she knew that such statements weren’t even close to being true. And so she was silenced and kept it all to herself. For decades. Like so many of us.

We can choose to not let the abuse we experienced colour and dictate the rest of our lives. We can take that power back.

The energy of women who have not been sexually abused is quite different. Most often they have not accessed the powers of vulnerability and surrender to a force greater than themselves. They often have no access to the primal force within, that makes the world shudder.

Our female ancestors gathered together almost daily, be it around the women’s fire outside their huts, be it in the kitchen around the fire in the hearth, be it for preparations in the boudoir before a celebration, or in the comfort of a home with a cozy cup of tea. The energy of the women’s fire cherishes, nourishes and strengthens our womanhood. This is where we heal, where we are heard and where we teach our daughters the powers of the womb, so that they will be well protected by the strength thus gained.

I have been blessed with the privilege of introducing young girls, teenagers and women to the powers of their womb, no matter what their experience. Welcome to the women’s fire.

Oona teaches highly empowering courses in which women and men regain their power to deal with everyday emotional dramas – Courses such as Feelings, Consciousness, At the Women’s Fire, Cosmic Woman, Cosmic Man, Lightlanguage and OI in Scotland.

2 thoughts on “At the Women’s Fire – Wounded Women”